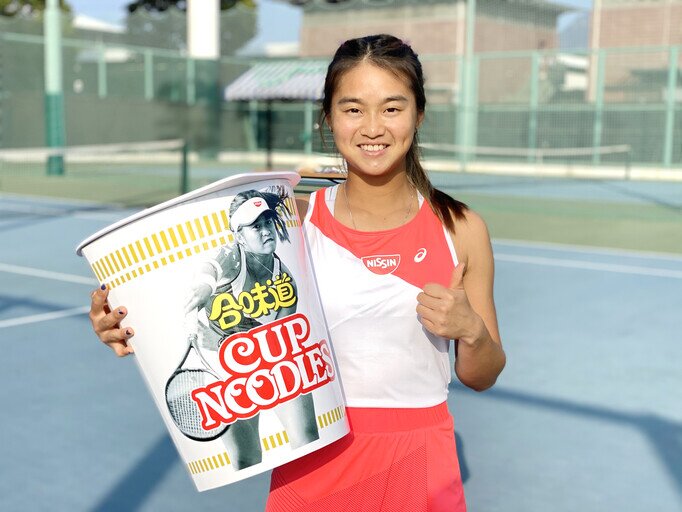 Cody Wong said: “Nissin Foods’ 2-year sponsorship is a vote of confidence in my potential to excel, enabling me to go all the way and move on to becoming a professional player.”

Nissin Foods announces a 2-year sponsorship for a rising tennis star Cody Wong Hong-yi from January 2021. Cody Wong is the first Hong Kong player in 36 years reaching last 16 of girls' singles at Wimbledon and the first to reach quarterfinal of girls’ singles at the Australian Open. As she turns 19 this year to play professional full-time, Nissin Foods comes in at this significant time to back her up clinching more honours in international tournaments and thus improving her world rankings.

Nissin Foods is no stranger to athlete sponsorship. The company has been sponsoring another young tennis player Coleman Wong since July last year, and is also supporting the local elite athletes by teaming up with the Sports Federation & Olympic Committee of Hong Kong, China (SF&OC) as the exclusive food partner of Hong Kong’s delegation to Tokyo 2020.

Being the “Youth Development Partner” of the Hong Kong Tennis Association (HKTA), Nissin Foods has been supporting local youth tennis tournaments hosted by HKTA since 2015, to provide a valuable platform for young tennis players to hone their skills before they progress to international events. The elite Hong Kong junior Cody Wong has been a winner in the Nissin Cup Noodles Hong Kong Junior Tennis Series and Nissin Hong Kong National Junior Tennis Championships respectively in 2015 and 2017, showcasing her skills at young age.

Mr. Kiyotaka Ando, Executive Director, Chairman of the Board and Chief Executive Officer of Nissin Foods said: “In pursuit of our founder Mr. Momofuku Ando’s belief that ‘eating and sports as the two axles of health’, Nissin Foods is an active sponsor of sports activities in particular the tennis junior development. Cody’s determination, persistence and attitude to winning tie in well with Nissin Foods’ corporate slogan ‘HUNGRY to WIN’. We are giving full support for her to become an elite professional tennis player and embrace more challenges in international tournaments.”

Cody Wong said: “I am delighted to be engaged with Nissin Foods again. Thanks to their continued support to the local youth tournaments, where I gained invaluable contest experiences and built a solid foundation for the international tournaments. The 2-year sponsorship is a vote of confidence in my potential to excel, enabling me to go all the way and move on to becoming a professional player.”

Cody is an all-rounded tennis player with aggressive double-handed backhand. Her natural talent and good grasp on the keys to winning have added to her strengths to excel in the tournaments. Cody earned her first International Tennis Federation (ITF) girls’ single championship in 2017 and was no. 18 in the ITF Junior Girls’ ranking. Her career-high Women’s Tennis Association (WTA) ranking is world no. 844. To turn a new page in her life at the age of 19 this year, Cody strives to go along with her ever-improving WTA ranking to be a top 50 WTA player. She will also work hard to be qualified for the Olympic Games while winning more Grand Slams.