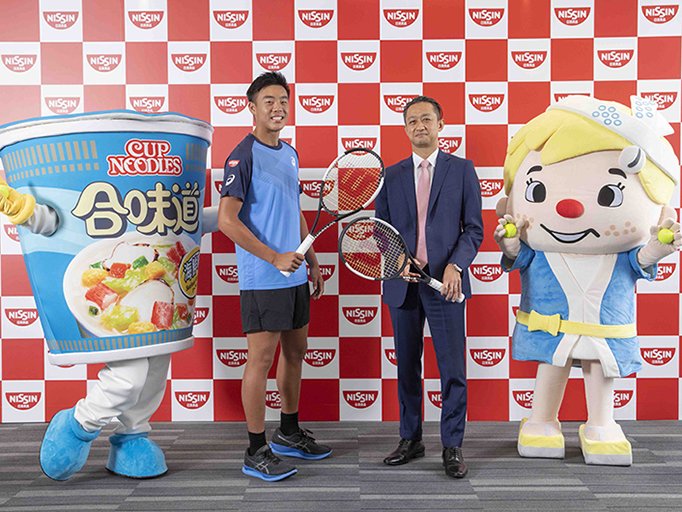 (Hong Kong, 29 June 2020) Nissin Foods Company Limited today announces that the company will give a 2-year sponsorship in 2020-2021 for Coleman Wong Chak-lam, a sixteen-year-old Hong Kong’s most promising young tennis player, enabling Coleman to vie for more honours in international tournaments. The city’s largest instant noodle and renowned food company has teamed up with the Hong Kong Tennis Association (HKTA) as the official Youth Development Partner for years, and the latest sponsorship for Coleman Wong indicates the brand has again offered its support to an individual tennis player.

In pursuit of the founder Mr. Momofuku Ando’s belief that “eating and sports as the two axles of health”, Nissin Foods is an active sponsor of local sports activities in particular the tennis junior development. Nissin Foods has been supporting the local youth tennis tournaments hosted by the Hong Kong Tennis Association since 2015, and is the current sponsor of HKTA’s 3 major tournaments - The Nissin Hong Kong National Junior Tennis Championships, Nissin Cup Noodles Hong Kong Junior Tennis Series, and Nissin Demae Iccho Hong Kong Junior Tennis Novice Competition. The Company is committed to providing a valuable platform for the young tennis players including Coleman Wong when he started to participate at age 11 to showcase their skills and to lay a solid foundation for their overseas matches.

Mr. Kiyotaka Ando, Executive Director, Chairman of the Board and Chief Executive Officer of Nissin Foods spoke highly of Coleman Wong and said, “Coleman is a tennis star in the making in Hong Kong. In addition to his gifted talent, he has also displayed perseverance and proven determination to embrace challenges in different international tournaments to push his ranking. These personality traits tie in well with Nissin Foods’ corporate slogan ‘HUNGRY to WIN’, and also boost Coleman to clinch victories in many prestigious tournaments. I believe he can be a top 10 player in Asia and globally in the future. I wish he can be the next tennis superstar Kei Nishikori. Nissin Foods will continue its commitment to identify and support budding athletes, with the aim to promote local sports development and healthy lifestyle in the community.” Nissin Japan has been supporting Mr. Kei Nishikori since 2008. He is the first male player representing an Asian country to reach a Grand Slam singles final.

The sixteen-year-old student has displayed his massive potential in the sport and has already proven it as the first Hongkonger to win the under-14 title at the Junior Orange Bowl in late 2018 – one of the most prestigious junior tournaments in the world. This March, Coleman won his first Grade 1, ITF Junior Tour title in Nonthaburi, Thailand, securing qualification into the French Open Junior event this year and the Australian Open Junior 2021. His immediate goal is to win a Junior Grand Slam title and to work on winning more Grand Slams, and eventually to be the highest ranked tennis player.

Putting his name in lights in the recent years, Coleman started playing tennis at age of 5. He has been a regular player in the three tournaments which Nissin Foods was the title sponsor. Coleman Wong said, “I am familiar with Nissin Foods, as I have been participating in the tournaments sponsored by Nissin Foods for years. Nissin-sponsored tournaments provided a unique platform to sharpen my skills and offer valuable match-play experiences paving the path for my tennis career. I feel privileged to receive Nissin Foods’ support in 2020 and 2021 which allows me to fully focus on prepping for my international tournaments and returning back home with more honours.”

Nissin Foods announced the company has joined the chorus to support local elite athletes through team-up with the Sports Federation & Olympic Committee of Hong Kong, China (SF&OC) as the “Exclusive Food Partner of Hong Kong, China’s Delegation to the Tokyo 2020 Olympic Games.” The Group will continue to sponsor outstanding local athletes and relevant sports activities.

The sixteen-year-old tennis star and student has clinched victories in many prestigious junior tennis tournaments in Hong Kong and around the world. Following him turning professional in 2019, he has won accolades in leading tournaments - secured a place in both 2019 and 2020 at the Australia Open Juniors, one of the four Junior Grand Slams, and won both singles and doubles titles in the JIP ITF international junior tournament (U18) in Jakarta, Indonesia in early 2019. He has also hit a record by winning the men’s singles champion in the CRC 2019, becoming the tournament’s youngest-ever title winner.

In March 2020, Coleman won the Grade 1, ITF Junior Tour title in Nonthaburi, Thailand, securing himself a qualification spot into this year’s French Open Junior event and the Australia Open Junior event in 2021. The triumphant victory leaps up his Hong Kong National Rankings Men’s Single to the third place and his ITF World Tennis Tour Junior Ranking to 34, making him the highest-ranked player from Hong Kong on the board as well as the highest ranked player born in 2004 globally.

In 2020, Nissin Foods will now be sponsoring Coleman Wong as an individual player, with financial support for his overseas competitions for 2 consecutive years.